Conference of our Chairman Hiroshi SAKURAI in Paris 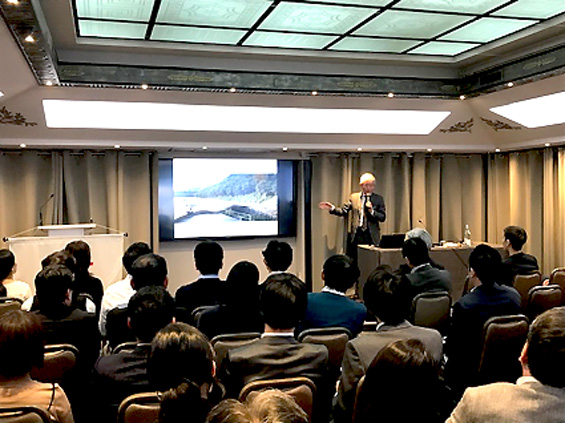 A conference of our chairman was held by the Japanese Chamber of Commerce in France, at Hotel Napoleon in Paris.
The talk concerned the reasons behind Dassai’s success story. Mr Sakurai stated that, because Dassai’s brewery is located in a depopulated village deep in the mountains, he just could not make a living in his hometown, which forced him to craft a sake that could emerge on Tokyo’s market. These reasons also led him to attach the most importance to branding and to making high quality products.

Mr Sakurai also reflected on his business: “It is because we were the losers, because we were the most failing sake brewery in the industry, that we managed to make it to today’s success”. A success discussed by the chairman, specifically concerning how Dassai is doing abroad.

Indeed, with 15% of the Japanese sake export value, Dassai is not only leading the market, the brand is involved in unique activities around the globe. For example, Dassai has teamed up with Chef Joël Robuchon to run a restaurant “Dassai Joël Robuchon” in Paris. Dassai will also open a new production site in New York, the sake to-be-crafted over there will be called “Dassai Blue”, a unique production destined for the US market.
After the conference, a cocktail party was held with the participants from whom we received warm cheering messages as to our future activities. We shall do our best on continuing crafting and providing the best Dassai possible.