Before I go into detail about my time at the Dassai brewery, let me introduce myself. My name is Richard Eriksson born in Sweden, Boras, and I have been with Asahishuzo CO.,Ltd. the makers of Dassai sake for about 4 years. Although the brewery is located in the outskirts of Iwakuni, Yamaguchi prefecture, I am based in Tokyo at the Dassai Store Ginza since its opening back in 2016. During my time with Asahishuzo I been very fortunate to work alongside with some of the craftsmen and very knowledgeable men and women from the brewery in Ginza and attending an array of different events, promoting and serving Dassai sake to all kinds of people. Due to this I have been able to study and learn how sake is made, its history and maybe the most important of all, how to enjoy sake!
However up until now my experiences of making sake have mostly been theoretical, had lots of information but never physically put them to use. So it finally happened, I spent two weeks, from the 27th of January to the 7th of February 2020, putting my knowledge to test and actually working side by side with the craftsmen at Dassai brewery.
So what follows are some of the insights of what I did and what I took with me from this experience. If you are hoping for some more in-depth knowledge about how Dassai sake is made, I will cover that later in a different post. 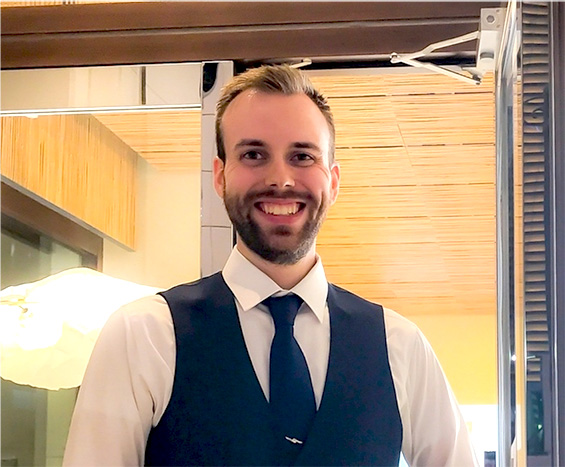 The first day was probably the longest day and most tiresome day out of the two weeks at the brewery. It started early morning in Tokyo catching the first flight to Iwakuni airport. Arriving 8:40 AM to be picked up by a colleague, the former Ginza store manager now managing general sales in west Japan. Since the brewery is located outside the Iwakuni city, in the nearby mountain range, it takes about 40-50 minutes by car to get there. On the way to the brewery you will find different locations with the Dassai logo on the buildings, many times mistaken for the brewery. In actuality these are the separate locations Dassai is using for the rice-polishing and the warehousing. Finally arriving the main Dassai brewery it may take some people by surprise. Driving through the countryside through some old looking villages, then round a corner to be greeted by a 12 storied building that the Dassai brewery is. 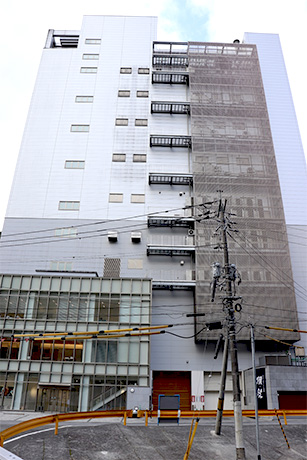 Once done the formal greetings and had a quick change into the proper clothes, which is all white with Dassai logo on. It was time for a quick introduction of the rice washing process. This became my position for 2 days, and it was probably one of the most physical demanding works I have done in a long time (had worse jobs before). What hit me the most when washing the rice was the cold water. At first it was almost painful, continuously soaking your hand in about 5°C had some effects. At a curtain time my fingers stopped moving properly because of the cold and it became difficult tying the ropes necessary to close the bags of rice when washing. However over time it became easier and easier, and I could work in it with no problem. The second really surprising part of the washing process, was the minute timing it had. To make sure to wash and let the rice absorb correct amount of water it at to timed perfectly, working in a 4 minute interval where every second counts. At first this was quite overwhelming but after time and learning the rhythm and getting used to the cold water, there were times that you could catch a few seconds rest. 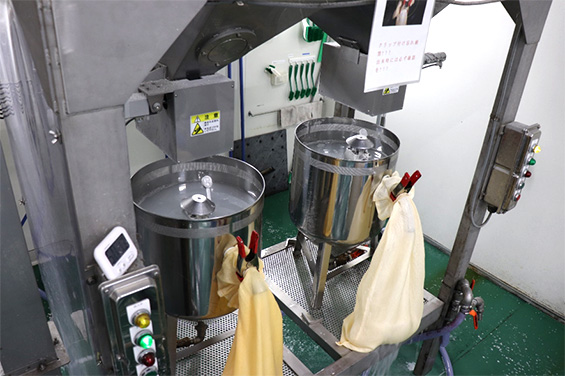 Finally after an early morning followed with a good day of hard work, I was lucky to be able to join a dinner with the chairman, CEO and some of the senior management of the company, enjoying some authentic teppanyaki.

After quite an impressive first day at the brewery I managed to get some good sleep in the private lodging they have set up at the rice-polishing facility. Then after more reasonable early morning I get a ride to the main brewery which is about 15 minutes away from there.
During the daily morning meeting they have at the brewery, I had a proper introduction in front of all of the brewery members, which I did not prepare for and I have a feeling that I did a poor impression at the time. But I think I managed to recover from it after personally meeting all the members at their sections. After the daily morning meeting I headed back to the rice washing again where I spent my second day. By repeating the work I just learnt I was able to talk and learn more about it. Learning the importance of it and how much of an impact it has of the overall sake making. That’s probably why I feel that they have some of the most focused minds at this process, making sure there are no errors from the beginning. 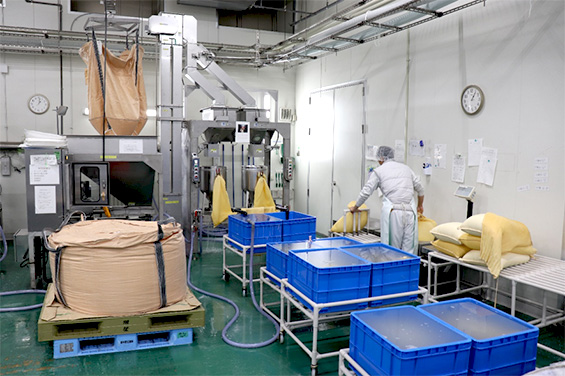 On the third day I spent the morning hours at the rice steaming process, which is next door to the rice washing. This is because after washing the rice it will be sealed and rest one night to be steamed the day after. So I essentially steamed the rice I washed the day before. The steaming of the rice was not as labor intensive as the washing but it had its moments when you had to stay sharp. Using pressurized boilers to make the steam, you have to monitor the machines carefully. Then when the larger conveyor-fed steamer is working you have to continuously feed it with rice whilst also maintaining a sanitary environment. Since when the rice is cooked by the steam it is quite vulnerable to outside contaminations. So cleaning the facility is a high priority at this process. 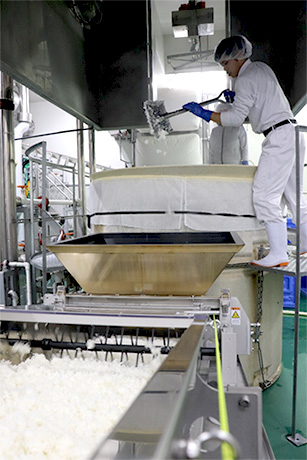 Around noon I moved to the shubo making. Finally learning and truly understand the enigmatic shubo was one of the highlights for me during my time at the brewery. The way shubo is made and its effect on the overall outcome of the flavour and aroma of the sake. As well as to why it is so important to have and maintain to create the necessary yeast for sake making. This is probably where each sake brewery’s most guarded secrets lie. 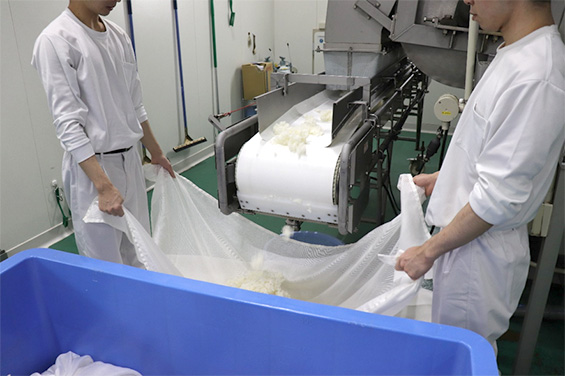 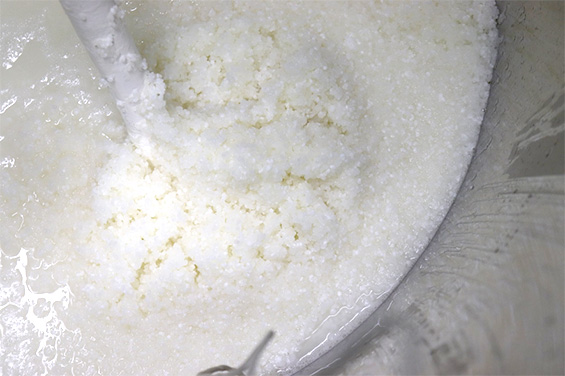 On the fourth and fifth day at the brewery I get to spend the days where the real sake magic is happening, at the mixing tanks. At the Dassai brewery they call it “hakko-kanrin” fermentation management. At this stage of the sake making it starts by adding the ingredients in large tanks whilst mixing it by hand. At the beginning this is quite easy, but as the volume increase it gets more and more heavy by the mass of the rice. The room which the tanks are housed in is climate controlled to stay at 5°C to maintain a slow fermentation of the sake. It was quite cold at first but as you mix the heavy sake mash I was sweating by the time it finished. What surprised me the most was the use of ice cubes in the mash, which made it look like a big milky cocktail. This is in order to counterbalance the warm steamed rice that is added in the mixing process to maintain an overall low temperature in the sake mash. But since ice cubes is solid water it will just melt and add to the mix accordingly. 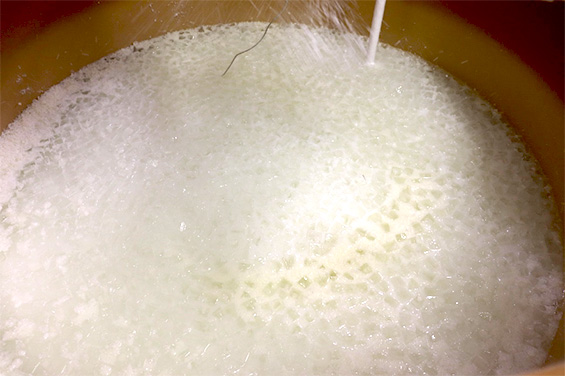 After the mixing of the sake mash is done, we have to do regular checks at each tank in the brewery which is spread over three floors. This can be a bit time consuming but crucial to be able to maintain a good fermentation of the sake. Walking between the tanks with the fermenting sake mash you can clearly see and smell how the mash changes from day to day. As the fermentation gets really active the mash will start bubble from the release of gases. 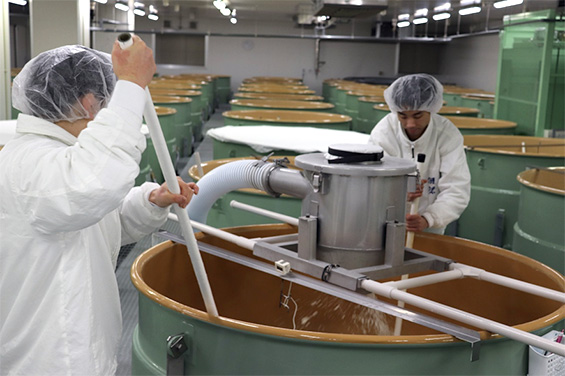 It was truly an interesting first week, which I was able to put my sake knowledge to the test and to get a hands on experience of how Dassai sake is made. The overall impression I got from it was it is a deceptively difficult and heavy work making sake. Even though the brewery try to innovate and use more modern machineries and technologies, there is still a lot of things machines cannot do. To see, touch and smell the different stages in the process is crucial to stay flexible and adjust to the small changes that can happen when working with the rice and the fermentations to create sake.

So without a doubt there is a need for human hands to make sake. This is especially true for making and maintaining the outstanding quality Dassai have. 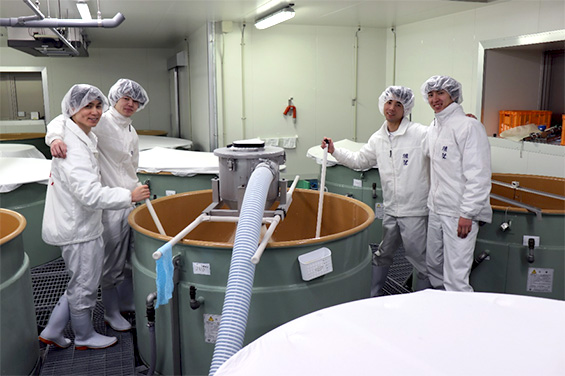