Releasing an opinion ad in the Nikkei Newspaper on May 24th 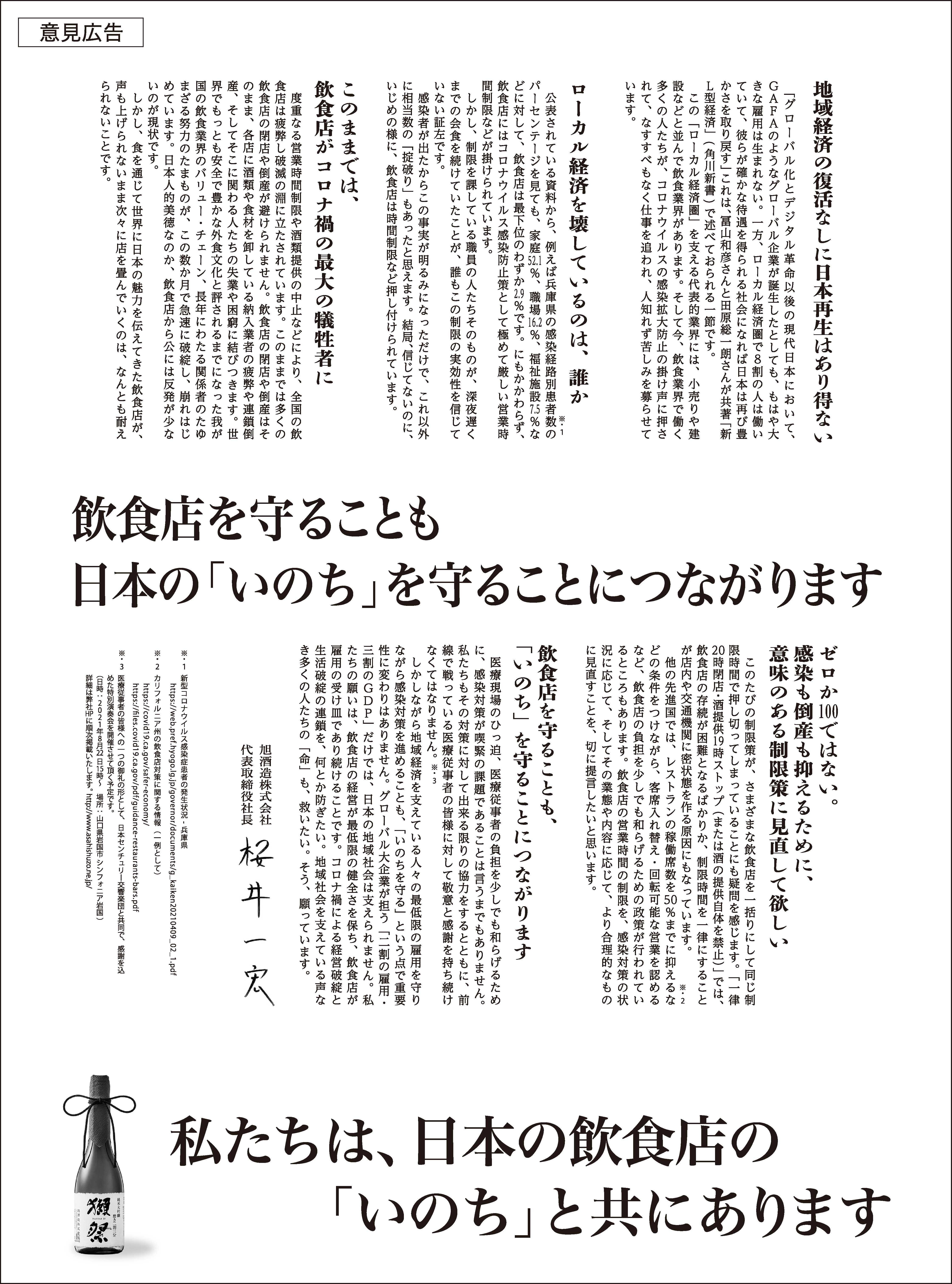 Without a revival of the local economy, there can be no revival of Japan.

“In today's post-globalization and digital revolution Japan, the emergence of global companies like GAFA would no longer create significant employment. On the other hand, 80% of people work in local economies, and if we can create a society in which they are treated well, Japan will regain its prosperity.”

This is a passage from a book co-authored by Kazuhiko Tomiyama and Soichiro Tahara, "The New L-Type Economy" (Kadokawa Shinsho).

Who is destroying the local economy?

In Hyogo Prefecture, for example, the percentage for transmission routes is 52.1% for households, 16.2% for workplaces, and 7.5% for welfare facilities, while restaurants are at the bottom of the list at just 2.9%. Despite this, restaurants are subject to extremely strict and limited opening hours and other measures to prevent infections. (*1)

This fact only came to light because there were infection cases amongst them, but it seems to me that there were quite a few other "rule breakers" we haven’t heard about yet. After all, even though no one believes it, restaurants are forced to have a restriction like bullying.

If this continues, restaurants will be the biggest victims of the coronavirus.

Repeated restrictions on opening hours and the prohibition of serving alcohol have left restaurants across the country exhausted and on the brink of ruin. If this trend continues, many restaurants will inevitably close or go bankrupt. The closure and bankruptcy of restaurants will lead to the chain bankruptcy of their suppliers of alcohol and foodstuffs, and the unemployment and destitution of the people involved.

The value chain of our food and beverage industry, which has come to be regarded as one of the safest and most prosperous in the world, and which has been the fruit of the tireless efforts of many people for many years, has in recent months rapidly begun to break down and crumble.

Perhaps it is a Japanese virtue, but there has been little public outcry from restaurants. However, it is unbearable to see restaurants, which have been conveying the charm of Japan to the world through its food, silently having to close their doors one after another.

It's not zero or 100. The point is to make meaningful restriction measures to reduce both infections and bankruptcy.

I am also quite sceptic about the fact that the new restrictions lump all the different types of restaurants together and impose the same time limit on them. A uniform closing time of 20:00 and stopping the serving of alcohol at 19:00 (or banning the serving of alcohol itself) will not only make it difficult for restaurants to survive, but it will also lead to dense conditions inside restaurants and inside public transportation.

Other industrialized countries have introduced policies to ease the burden on restaurants with conditions such as limiting the number of occupied seats to 50%, which in turn allow them to quickly rotate customers. We would like these restrictions on the opening hours of restaurants to be reviewed to make them more reasonable according to the situation of infection control, and according to the type and nature of the business

Infection control is an urgent issue to relieve the pressure on healthcare workers. We must do all we can to help, and be grateful for all them fighting on the front line.

Having said that, protecting the employment of the people supporting the local economy is also “saving lives”. Japan's local communities cannot be sustained based on the "20% of the national employment and 30% of GDP”, represented by large global corporations.

We hope that the restaurant industry will remain as healthy as possible and that restaurants will continue to be a source of employment. We want to prevent bankruptcies and lifestyle collapses due to the virus. We want to save the lives of the many voiceless people who support our local communities. That's what we want.

We are with the "life" of the restaurant industry of Japan

*3: As a way to express our thanks to those who work in the medical profession, we will be holding a special concert in collaboration with the Century Orchestra of Japan. (Date: 2021/8/22 15:00, Place: Iwakuni City, Yamaguchi Prefecture / Sinfonia Iwakuni) More details will be posted on our website as they become available. All medical professionals are invited to attend.