Top > News > Yamada Nishiki Project 2021: The preliminary screening of this year’s rice has been held

Yamada Nishiki Project 2021: The preliminary screening of this year’s rice has been held

On this day, we held the preliminary screening of this year’s rice submitted for entry to the Yamada Nishiki Project 2021 at Asahi Shuzo’s rice polishing factory. 39 different rice batches passed the analysis prior to jury screening.

This year is the third edition of this project, which began in 2019.

This project is a contest between farmers from all over Japan, evaluating the quality of their Yamada Nishiki rice, all in order to make farming a more vibrant and attractive industry and of course, to make Dassai even more delicious.

This year, one man joined the jury: M. Enomoto, a staff member of Asahi Shuzo with 11 years of experience in rice polishing (He is the most knowledgeable man in Japan about Dassai’s rice! He has seen and polished more Yamada Nishiki rice than anyone else in the sake industry).

But there is a specific reason why we wanted to include one of our staff members among the jury: ironically, it is because we have faced a problem with the excellent quality of the Yamada Nishiki rice submitted to us.

Many of you may know that, we have crafted a Dassai with the rice that won the 1st edition of the Yamada Nishiki project: Dassai Beyond the Beyond – Grand Prix Yamada Nishiki 2019. It was auctioned last year at Sotheby’s for a top price of about 840,000 yen a bottle.

What about last year then? Well, although the sake made with the Grand Prix-winning rice of 2020 was of very high quality, we realized it did not reach "beyond the best”. This is why we never released it to the world.

The Grand Prix rice itself had a very large central "shinpaku" (starchy core) and such rice would tend to crack more easily during the grain polishing process. This made it unsuitable for making more than "Dassai Beyond" grade Dassai sake. (*see note)

Therefore, this time, the judges decided to take into account whether the rice could withstand a higher polishing rate than the norm and whether it was suitable for Dassai sake crafting process.

The judges seemed to be confused about the judging method, as the standards were different from the conventional grading inspection, but eventually finished the preliminary screening: excellent rice batches were chosen to go on to the final screening.

After a serious screening process, 14 different batches of Yamada Nishiki from 6 prefectures were selected to remain for the final stage of the competition.

Please wait until Saturday, January the 15th, 2022 for the announcement of the Grand Prix and Runner-up Grand Prix.

*Note: “shinpaku” is the cloudy white center of the rice grain. It appears white because it has many gaps in it where light is diffusely reflected. This is where the koji spores can grow their roots and produce strong koji rice. But because of these many gaps, it makes it more brittle and would easily crack during the grain polishing process.

In general, a large shinpaku is a characteristic of good Yamada Nishiki rice.

Here is an example of one Yamada Nishiki rice batch that was submitted to the contest. The shinpaku is the cloudy white area in the center of the grain. 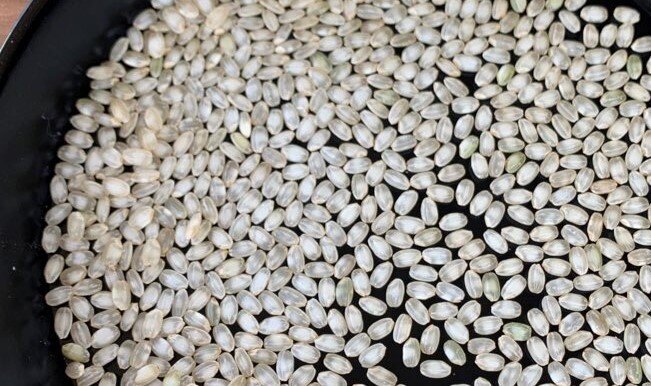