“We did not expect to win so we are surprised but extremely happy. It was hot during the harvest but I want to keep motivating myself. I want to use the prize money to purchase agricultural machinery. I will definitely aim for consecutive championships!” 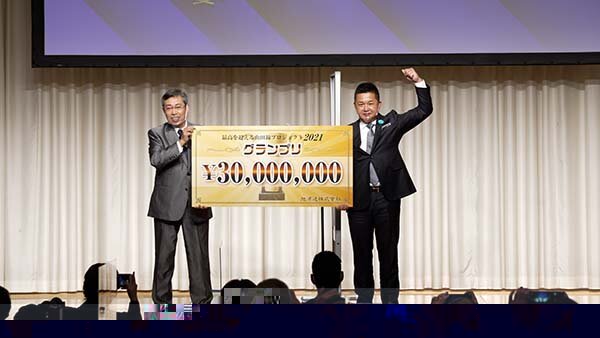 Mrs. Takada and their son was also present at the ceremony.

Striking a victory pose with the prize money, Mr. Takada shows that Japan’s agriculture has a bright and exciting future ahead.

Although Okayama prefecture is famed for the production of sake rice “Omachi”, Yamada Nishiki will also gain attention from now on.

“I’m proud to have won the award even though it’s not in the Special A region. I think this is a great encouragement for producers around me who are depressed due to the influence of corona and the like.”

While Kato city, Hyogo Prefecture is famed nationwide as the production center of Yamada Nishiki, Mr. Sugano cultivates the rice in an area which is not in the highly reputed “Special A” production area.

Because of hazardous weather, Mr. Sugano almost gave up selling his rice on several accounts, but emerged as dignified semi-grand prix. This will be a tremendous inspiration for local producers. 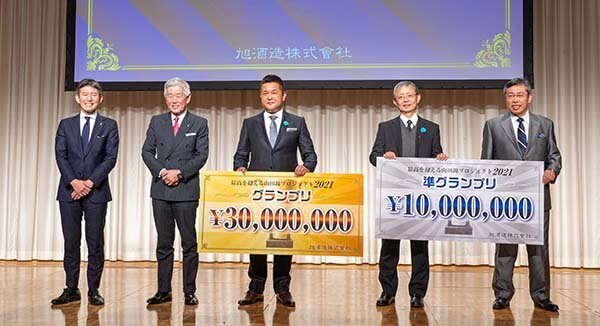 What is the Yamada Nishiki project?

A contest will be held in which Yamada Nishiki farmers nationwide who contracted with Asahi Shuzo challenge to produce Yamada Nishiki better than ever. Grand Prix rice presented a prize of 30 million yen (280,000 USD) for 60 kg of rice, which is about 25 times the market price. This is the third time since 2019, and there were more than 50 entries from individuals and companies from 11 prefectures all across the country.

The major focus this time is the addition of the perspective of “Is the rice suitable for DASSAI’s sake brewing?” as an evaluation standard.

Previously in 2020, the Grand prix rice contained large shinpaku (the white part in the center of Yamada Nishiki grain which is important in sake brewing) that is characteristic of Yamada Nishiki. However when actually making sake, it turns out to be unsuited for ultra-high-polishing, which polishes rice to 20% or less, as in the case of Dassai.

Therefore, the evaluation standard from this year onwards is “ultra-high polished rice that can withstand the elements essential for making quality sake that exceeds conventional sake”. Specifically put, rice with a small central shinpaku is considered good.

It was an unprecedentedly difficult judging session for the panel judges.

We hope that holding this contest will help farmers have dreams and take pride in their work.

Aiming for Dassai that goes beyond the highest

Although sake is gradually gaining attention along with the spread of Japanese cuisine, it is necessary to overcome the cultural war with other alcohols including wine in order for sake to be recognized globally. Asahi Shuzo strives to increase the value of sake in the world by producing the best Dassai and making it known worldwide.

We will continue to take on the challenge in shaping the future of sake with Yamada Nishiki producers in a way that is unique to DASSAI.